Art and Release of Traumatic Memory : a South African Perspective 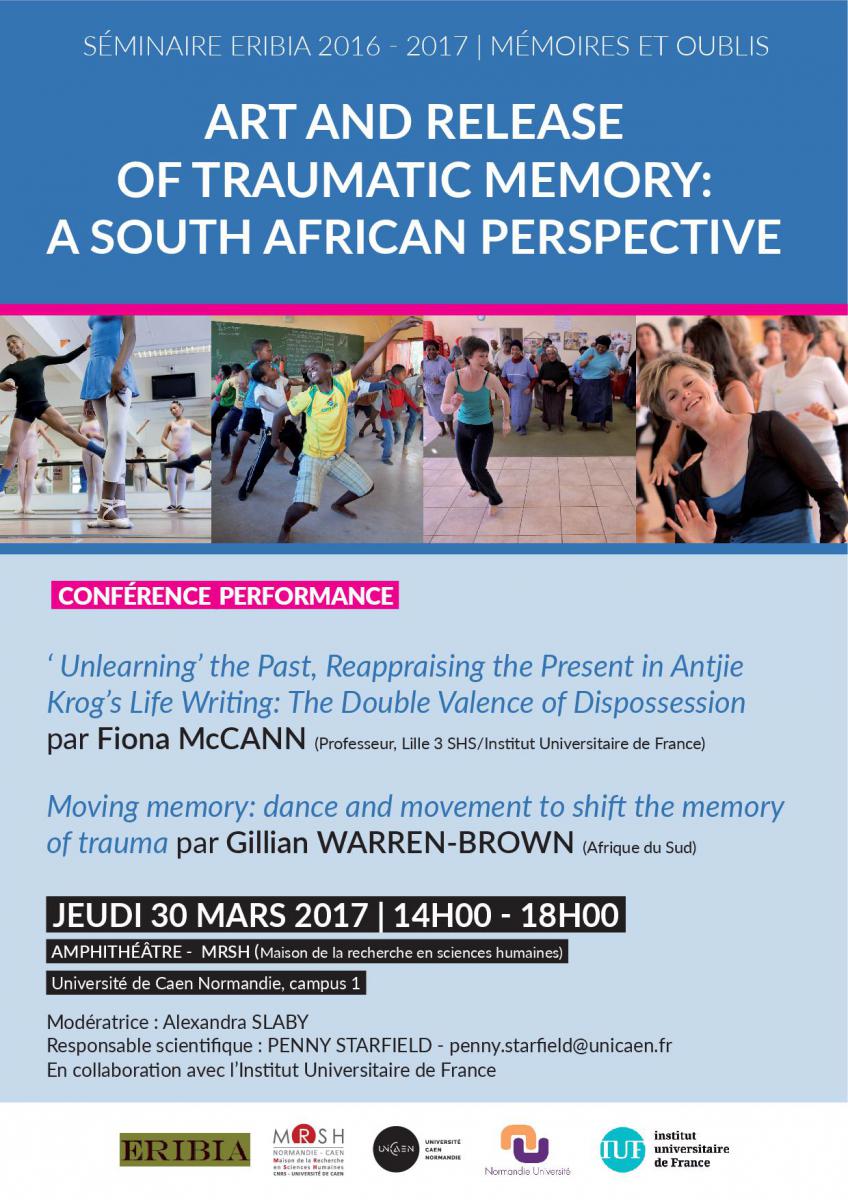 Fiona McCann is Professor of postcolonial literature at the University of Lille SHS and a junior member of the Institut Universitaire de France. Her research focuses on contemporary South African,  Zimbabwean,  and  Irish  writing,  in  particular  prison  writing  and,  more  generally,  the poetics and politics of representing violence.
Unlearning'  the  Past,  Reappraising  the  Present  in  Antjie  Krog's Life  Writing:  The  Double Valence  of  Dispossession.
This paper aims  to  explore  South  African  poet  and  journalist Antjie  Krog's  four  volumes  of  life  writing,  Country  of  My  Skull (1998), A  Change  of  Tongue (2003), Begging  to  be  Black (2010),  and Conditional Tense (2013).  Already  the  subject  of  a good  deal  of  criticism,  both positive  and negative,  Krog's  works raise  interesting  questions about how the legacies of colonialism and apartheid might be addressed, and represented, in the 21st century. I would like to build on existing criticism and tackle these texts through the  prism  of  Athena  Athanasiou  and  Judith  Butler's  recent  work  on  the  double  valence  of dispossession (which they define as being both relational and material). I will argue that the syncretic  aesthetics  developed,  moving  between  journalism,  faction,  and  mythopoesis, enables  Krog  to  contribute  in  innovative  ways  to  the  politics  of  commemoration  in  South Africa,  particularly  debates  on  the  Truth  and  Reconciliation  Commission,  and  foregrounds er  own  willingness  to  be  dispossessed  (relationally)  and  a  meaningful  discussion  on the  legacies  of  material  dispossession  from  colonial  times  right  through  to  the  present.

Children from township communities in South Africa live with the constant stress of crime and poverty. Many have experienced overwhelming trauma, which compromises their ability to function and thrive. In my presentation, I will talk about how dance has helped these children to come home into their bodies and how the challenge of learning complex choreography empowers them with processes that help them cope with daily reality. To illustrate, I will draw on the inspirational example of Dance for All, a Cape Town non-profit organisation I wrote about in my book Pieces of a Dream. I will also refer to other dance and movement techniques that facilitate the release of stress and trauma and, regardless of age, promote clarity of mind and memory. - Gillian Warren-Brown
These are children who live with the stress of crime and poverty; many have experienced trauma and have told Gillian Warren-Brown their stories. In preparing her book Pieces of a Dream: the story of Dance for All, Gillian worked closely with many of them and, while sharing their stories, they also told her what dance does for them. That it brings them home into their bodies and keeps them in the moment, connecting them with their senses. This is the key to them being able to cope with their reality and, over time, release their traumatic memories and heal. As a writer, Gillian specialises in health, wellness, art and culture, and focuses on stories that celebrate South Africans’ creative, innovative, pioneering spirit.  As a dancer and movement specialist, Gillian is a passionate advocate for the benefits of dance and movement and is a qualified instructor in the Nia Technique (dance and martial arts fitness fusion for body and soul), Ageless Grace and Trauma Releasing Exercises (TRE).